Many people are describing my work as a type of poetry or some sort of narrative. This has led me to think about my project in a series of chapters, like a visual book, each section containing its own research and production of photographs. By doing this it has enabled me to think about the different sections within the project and to gain a greater understanding of the relationships and connections between each piece of work.

I began this project in the autumn of 2014. My initial thoughts were to research the family photograph and its impact on the recall of memory and the experience it evokes when being viewed.

I started looking through and scanning the photographs in my Mothers family album. Viewing them on a computer screen almost felt like I was giving them a new lease a life. I became fascinated by the colour, light and shapes within the images. I started to crop and scan these crops at a higher resolution to further study the textures that these old photographs create.

These photographs were personal to me but when cropped they almost felt like they could be anyone’s? What did this say about the cropped images I was creating? Perhaps we don’t need all of the photograph to reflect or experience upon. This interested me greatly and I wanted to understand more about what I was doing. 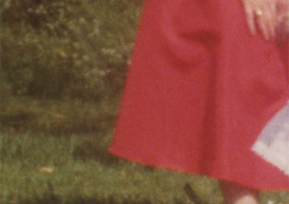 Roland Barthes idea of the punctum was something that could be reflected upon when looking at these cropped images. Were these crops of my punctums? I did not make crops of every photograph scanned and I did not scan every single photograph in my Mothers album. Why did I only use these?

‘ This second element which will disturb the studium I shall therefore call punctum: for punctum is also: sting, speck, cut, little hole – and also a cast of the dice. A photograph’s punctum is that accident which pricks me (but also bruise me, is poignant to me).’

I thought about my own memories and associations with these photographs. How could I approach them from a phenomenological perspective? What were my Mothers memories of these photographs? Researching more deeply into this led me to a discussion with my Mother about these family photographs. I listened to her as she spoke about the memories the album evoked…the photographs she connected with and the ones she dismissed. The photographs she took out of the sleeves and looked at more closely. What was she remembering now…in the present?

The power of the photograph has its own unique way of recalling memory, but how reliable is it? I was interested in pursing this further using the theory of phenomenology to ‘play on’ the experiences and senses of the viewer. I decided to make a projection of the cropped images to further develop my work in the project.

Whilst I was scanning and cropping my Mothers family photographs I also began to photograph my own children. At first I photographed them in and around the home and our everyday surroundings. As my interest in light, colour and composition of my Mothers photographs increased this led me to photograph my children up close. I began to look at their heads, feet, shoulders and hands. I began creating what appeared to be abstract images of our everyday. I started looking more closely at these little moments, photographing the details and thinking about the feelings they provoked. I was once again interested in the textures that these photographs created.

Using Meleau Ponty’s theory of phenomenology and the idea of ‘basic experience’ alongside ideas of the recollection of memory, I tried to develop these images further through their layout and relationship to one another. I thought about non linear narrative and what experiences or recollections could be made from the photographs when paired as diptychs or triptychs or even more. I wanted the viewer to experience the work as their own, creating personal experiences, stories and memories that only they could associate with. The photographs were presented in a way that could be mentally moved by the viewer in order to create a new narrative or they could simply ‘fill in the blanks’ if they wished.

The work was displayed alongside the projected cropped photographs of my Mothers family album. This was an important process in the final display of the piece as I wanted to show the connections between the two types of works, not only through the use of their abstraction but also the through their concepts of time. I realised that I was the link between these connections…I felt almost like a bridge…exploring from one process into the next. 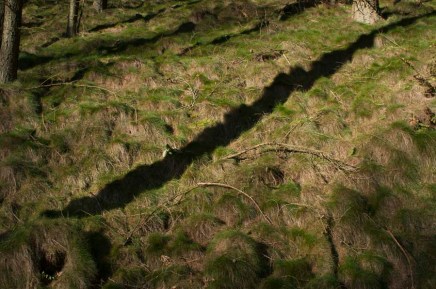 My Mothers physical family album was also displayed within the space, stood up and facing open towards the projection. All photographs were removed, suggesting that this is where the projected images came from. I felt it was necessary that this should play a role in the final display, (at this point) given the amount of time I spent with it during my research and again it connections to the other parts of the work.

Exhibition at Treforest Campus, the University of South Wales, 2015.

Final display and blurb for this part of the project

An exploration of photographic work that consists of an understanding of the photograph in relation to phenomenology and the family. My main interests for this piece of work were to analyse the colour, light and composition of my mothers family photographs, and to re-interpret this into my own experiences with my children in the present day. This has led me to understand the connections between the photographs despite the differences in time and photographic medium.

The piece is also designed to engage with the viewer on a level that is personal to them dependent upon their own life experiences. The non-linear narrative of the printed photographs also make suggestible the idea of how stories or associations could be made between these, as well as the potential of being mentally moved by the viewer into other spaces to create alternate ways of describing the work from their own perspective.

I have been photographing my children more using different camera formats. This has again included taking photographs that are up close…for example, observing their hands or hair and the daylight and composition of each image. I am trying to understand the relationship that these moments have with the camera and also with myself. The project has become more personal than I had imagined it would a year ago. I have began questioning my role as Mother and photographer so aspects of self identity are also beginning to be reflected upon during this chapter. 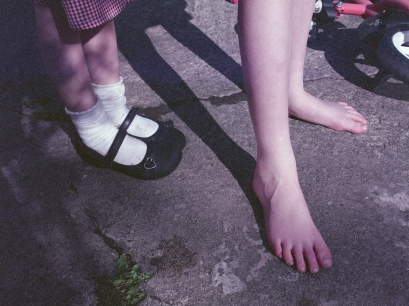 Exhibition at The Little Man Coffee Co and Reflections, 2016.

As part of my working progress I have taken part in an exhibition with some colleagues from the MA Art Practice course. It has has given me the opportunity to focus on the understanding and relationship between what I was working on last year and what I am developing now. 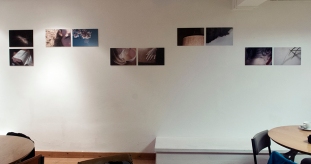 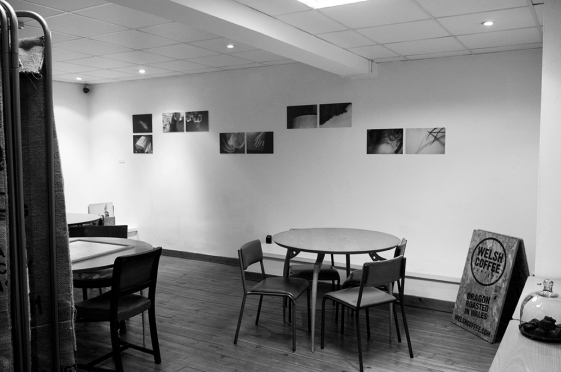 In the show I presented ten photographs from my current project. From left to right the first six photographs were from my MA Interim show and the next four were more recent.  I am beginning to feel confident in presenting my photographs as diptychs as oppose to a grid type form. From the show I understand that my work is becoming ever increasing more personal and getting feedback from viewers has been eye opening at this stage. People have said again that the photographs are like poetry and that only a mother would see these types of things, creating the feeling of love and ‘being in’ that moment. Printing my images at a larger scale has had a huge impact on my work…I am now beginning to understand where the project maybe leading as I continue to take photographs.

Whilst continuing on this chapter I began to physically include myself some of the photography. There seemed to be a shift in what I was doing and where I was going. The involvement of the self in my work became more than a physical representation but an understanding of my relationship with the camera and my subject. I began to question what it is to be both Mother and photographer. What does it mean to show or to represent my everyday…the overlooked.

I have recently had an exhibition at Jacobs Gallery in Cardiff. Here I showed six photographs from my chapter, ‘Looking’.

Gemma’s work explores the relationship between the self, the maternal and her role as Mother. She has developed her work through these connections in relation to her subject, the family and the everyday . Gemma’s work also explores different camera formats and narrative to convey this, using notions of memory, time and lived experience.

Following from the previous chapter I have been able to develop my understanding of my role as Mother in relation to the camera and my subject. I have increasingly become more aware of the moments I have with my subject, reflecting on notions of the overlooked in a photographic context. These photographic parts of my life, have become my own responses to my subject…looking at the colour and composition of each. I now feel an indescribable connection between seeing my experiences and then photographing them…fleeting with my camera in that moment. 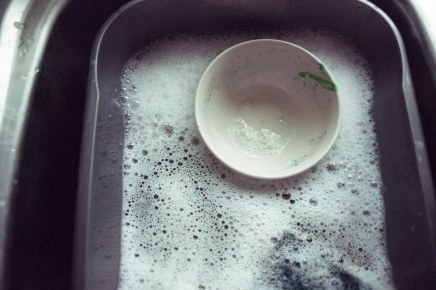 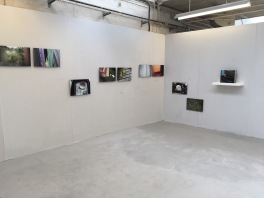 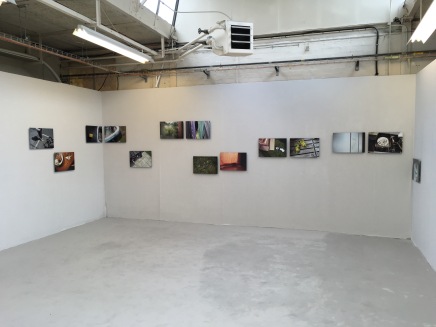 Gemma’s work, Found, refers to the idea of the overlooked in a photographic context. She engages with her subject through the camera, in response to her role as a Mother, typically photographing quirky, domestic situations. For the past two years she has pursed a project called, The Familial. Here she has researched and developed several chapters which explore themes of memory, identity, time, experience and narrative.

‘ In teaching us a new visual code, photographs alter and enlarge our notions of what is worth looking at and what we have the right to observe.’

From the end of November 2018 through to January 2019 I exhibited at the Cwtsh Community and Arts Centre in Newport. This also coincided with the community arts programme Art on the Hill. It was my first solo show and was a wonderful way to bring all the work together. Here I printed my Mothers cropped images and displayed them next to my own images of my children and the home. Again narrative was also played with, given the nature of the space. 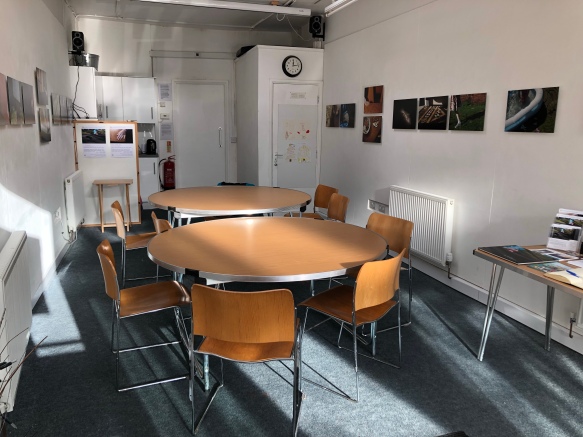 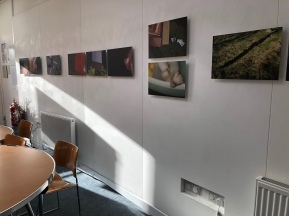 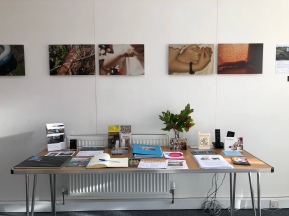 A few images of my book from the project, which was also on display at the Cwtsh Gallery. This was also a way to bring the different stages together as one body of work. 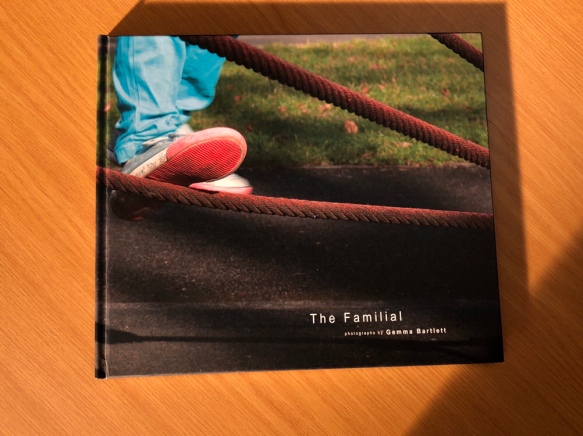 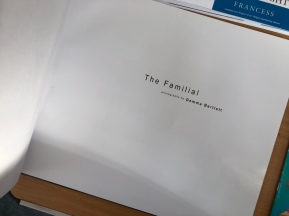 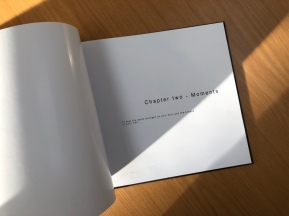 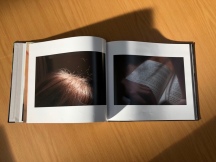